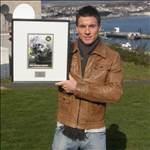 Ramsey resident James Toseland claimed his best result of the season with sixth place at the Dutch MotoGP at Assen on Saturday.

Toseland capitalised on Honda duo Dani Pedrosa and Andrea Dovizioso crashing out to move up the leaderboard.

The race was an historic victory for Valentino Rossi who notched his 100th career win to take a clear lead in the world championship.

Meanwhile, Cal Crutchlow is on pole position for today’s (Sunday) ninth round of the World Supersport Championship at Donington Park.

Peel’s Andrew Pitt will start from 15th on the grid.