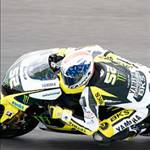 James Toseland came 12th in Valencia as he said farewell to MotoGP yesterday.

The Ramsey resident had been looking to go out on a high but finished down the field, behind both his Monster Tech 3 Yamaha team-mate Colin Edwards - who was an excellent fourth - and the man set to replace him next year, Ben Spies.

Newly-crowned World Superbike champion Spies was given a wild card for the race and duly showed what he was capable of, coming seventh.

Speaking to the BBC after the race, Toseland said he was now focused on winning a third WSBK crown: