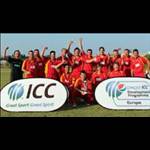 The Isle of Man faces a tough challenge in this year’s ICC Europe Division One tournament.

The Manx team were promoted from Division Two last season after victory in Corfu and are now set to battle it out with the other eleven countries in Division One.

The sides are initially split into two leagues, with the Island in Division B along with Denmark, Jersey, France, Belgium and Germany.

All these countries are ICC Associate members, while the Isle of Man is in the lower-ranked Affiliates section.

The competition will take place in Sussex at the beginning of July.

Four top grounds are to be used and the final is under floodlights at the County Ground at Hove.

The leading two sides at the end go forward to the Global World Twenty20 qualifiers in the United Arab Emirates.