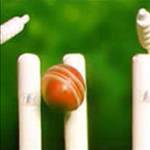 Castletown made it two wins in two days yesterday to go joint top of the Standard Bank Cain League with Cronkbourne.

They bowled out Crosby for 73 with Richard Jackson taking 3 wickets for 14.

Skipper Wicus Wessels then scored 49 not out as the Town raced to victory for the loss of two wickets.

Ramsey kept in touch with the leaders by beating Valkyres at Tromode.

The Northerners scored 102 for 9, but struggled against the bowling of Shahzeb Raja who took 4 wickets for only 7 runs.

He claimed 4 for 21 as the Douglas team were dismissed for 71, giving Ramsey victory by 31 runs.

At the top of the league Cronkbourne and Castletown now have ten points, with Ramsey on nine points.

Next week Cronkbourne play Ramsey in what could be the title decider.