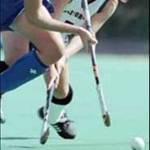 Valkyrs A inflicted a first defeat of the season on Vikings to stay top of the men’s Premier League on Saturday.

The star of the day was Karl Moore who hit SIX as reigning champions Bacchas A hit 11 past bogey side Ramsey A.

Doubles from Andy Whiting and Phil Smith, and one from Jamie Cox, ensured an 11-1 romp.

Sam Moffatt provided Ramsey’s only goal as Bacchas stay second with a game in hand.

Valkyrs B remain bottom but gained their first point of the season in a goalless draw with Bacchas B, while Castletown were too strong for Vikings B with a 3-0 success, courtesy of Paul Kelly (two) and Adam Fretwell.

In the women’s Premier League, Vikings A continue their relentless march towards retaining the title.

They thrashed Bacchas A 6-0 with Kim Carney, Zoe Carney, Becky O’Brien, Dani Coombes, Kirsty Hunt and Delta Williams all on the scoresheet.

And they’re now five points clear after second placed Valkyrs A were beaten 2-1 by Ramsey A, who move level with their opponents as a result.

Leanne Prescott was the Valkyrs’ scorer but goals from Laura Bellwood and Karmina Karanda won the match for Ramsey.

Castletown A left Phoenix A rooted to the bottom with a 4-1 win, thanks to goals from Lauren Stewart (two), Hannah Lace and Sophie Faragher.