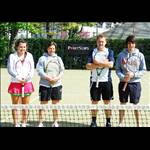 The finals of the PokerStars Tennis Open took place at the weekend, and both last year's singles winners retained their titles.

In the men's competition, number one seed Bruce Wagstaff took on second seeded Marc Chinn. With a large gap in the ratings of the two players a short match might have been predicted. However, Marc raised his game and matched Bruce's power and accuracy in the first eight games to 4-4. At the sharp end of the set Bruce edged ahead, his greater experience paying, off. He broke Marc and served out for the first set 6/4. In the second set, it was a similar story at the start with a break of serve early on for both players. Marc's good play forced Bruce to up his game and the latter eventually took the match, winning the second set 6/2.

In the Ladies' final Laura Feely, the number one seed, took on number two seed Karen Faragher. Until two years ago, Karen had not lost a match on the Island for the best part of 15 years. However, Laura, who celebrated her 17th birthday last week, has now got Karen's measure. She came out the gates really fast and, with Karen a little under her best form in the first set, powered to a 6/0 success. The second set was much more competitive with the score going to 4-4. Laura then got the upper hand again taking the next two games to win the match 6/0, 6/4.

The doubles competitions were played as round robin leagues with five teams in each. In the men's competition, Bruce Wagstaff and James Buxton managed to hold their form throughout the week and despite having a couple of close sets remained unbeaten to take the title. The last match of the day saw the youthful Marc Chin and Oliver Broadhead beat the more experienced Craig Blackwell and Peter Dunworth to take the runner-up spot.

In the mixed doubles competition, Bruce Wagstaff and Karen Faragher took the title, with Marc Chinn and Laura Feely the runners-up.

There was no ladies doubles competition, due to a lack of entries.