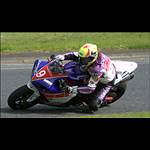 Welsh wizard Ian Lougher revived his love affair with the Billown Circuit when he won the opening Ultra Lightweight TT on Saturday.

He broke the lap record three times on his way to winning the first leg of the eight lap Motorsport Merchandise 125cc event over eight laps, in a time of 21 minutes 29.625 seconds.

Lougher and Castletown man Chris Palmer enjoyed some early dices on the circuit with Palmer having the edge early on before he was forced to retire on lap six and Lougher never looked back, recording an average speed of 94.911mph.

Maurice Mawdsley described the action and Lougher admitted Palmer pushed him all the way early on.