On Air Night Flight | Midnight - 5:00am
Jennifer Lopez - In The Morning Download

William back in action after high speed test crash 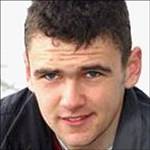 William Dunlop is gearing up to get back on the road, after crashing a bike on a test run on open roads.

It happened in the south of the Island near Port Erin.

William, a son of the late Robert Dunlop, was out on a Honda when he hit a stone wall at exceptionally high speed.

He is said to have escaped without serious injury, despite not wearing his leathers, and was able to practice last night.