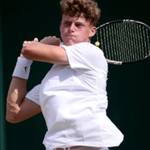 The 18 year-old from Albany Tennis Club, who was last week given a Wild Card for Junior Wimbledon, will play on court four against a junior from Chile - Jaime Ignacio Galleguillos.

His first round match is the second game due on court four, play starts at 11am.

The Grade 1 ITF is a pre-Wimbledon tournament on grass and attracts all of the top ranked juniors from around the world.

Since December, Billy has been training at Soto Tennis Academy in Sotogrande, Spain, which is run by head coach Dan Kiernan.

He has also been competing in Under 18 ITF tournaments in Europe and since January has competed in Slovakia, Czech Republic, Lithuania, Morocco and Hungary where he reached the semi-final.

Club chairman Stuart Colligon said: ‘This is a fantastic achievement for Billy, one of the Island’s brightest hopes in junior tennis and we wish him the best of luck in the competition.’

Stuart is also managing director of Auxesia Limited, a local business optimisation company, which has sponsored Billy this year.

Stuart added: ‘Providing support to junior tennis and watching Billy improve and enhance his performance is a perfect match to our business philosophy which is based on our core premise that by continually striving for one per cent performance improvements across all areas of business we can deliver significant total impact.’