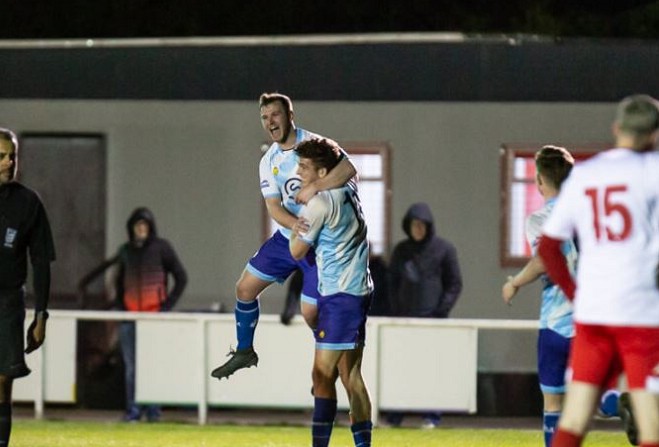 Cardy and McDonnell on target to send Ravens into next round

Two late goals from a youthful FC Isle of Man side saw them beat Cheadle Town 2-0 in the second round of the First Division Challenge Cup last night (9 March).

Going into the match at Park Road Stadium both sides had already overcome each other during the league campaign.

As a result of the need for rotation, availability and injuries - the squad for the tie had an average age of just 22.

The Island side started brightly in the opening stages, with the combination of Scott Horne and Furo Davies in particular testing the discipline of the home side's defence.

They then had to weather some good pressure from the hosts later in the first period, but ultimately neither side were giving an inch defensively as the clash remained goalless come half-time.

FC IoM started the second period much like they did the first with plenty of energy as they looked to put the pressue back on their opponents.

Cheadle Town's job then got all the more difficult on 59 minutes when Andrew Lunt received a red card following a foul on Ravens man, Adam Cooil, and resulting scuffle between both sides on the pitch.

As FC IoM continued to wear 10-man Cheadle Town down, the Manx side finally made the breakthrough on 77 minutes, when Nathan Cardy managed to bring the ball under control, progress into the Cheadle penalty area and slam the ball into the net.

The Ravens then sealed their place in the next round thanks to a goal from debutant, Ronan McDonnell.

Having come off the bench at half-time, McDonnell stepped up for a free-kick with just two minutes of normal time left.

As he struck it, a Cheadle Town defender dived in to clear but missed the block and the shot squirmed through the home side's 'keeper and into the net to make it 2-0.

The third round of the competition will get underway on the week commencing Monday, 21 March.

The Ravens will face an away tie against either Ellesmere Rangers or Sandbach United.