On Air Night Flight | Midnight - 5:00am
Labi Siffre - (Something Inside) So Strong Download 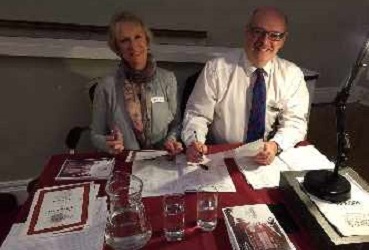 Trust us - we're stewards! Our photo shows Sue and Geoff Collier -  just two of the many volunteer stewards who attend all the classes, to put competitors at their ease, to make sure the Adjudicators have all they need, and to generally ensure the smooth running of the proceedings.  They don't feature on any of our programmes - but they surely all deserve a sincere word of thanks !

If you listen to Today at The Guild for Friday 28 April, you'll hear another great mix of talent - here's the details :

The programme starts with another chance to hear the solo songs from all the finalists in the Sheffield Plate competition - the junior equivalent of the Cleveland Medal.     Each child had to win the solo voice class for their age bracket in order to qualify for the award, which recognises the best young voice in the Festival this year.  The test piece for each class is a Manx traditional song.

ALEXANDRA SLATER  -  who was selected by Adjudicator Andrea Calladine as WINNER OF THE 2017 SHEFFIELD PLATE - singing "O What If The Fowler My Blackbird Has Taken?"   Alexandra is accompanied by Frank Woolley

RUTH TICKLE - winner of the 2017 Cleveland Medal test.  This fine soprano was chosen by Adjudicator Andrea Calladine, to receive the highest award which the Festival offers to the best adult voice this year.  Ruth beat off stiff competition from Jane Mayne, John Snelling, Michael Corkhill, Helen Prescott and the 2016 Cleveland Medal winner - Paul Costain.  Listen to her sing part of her winning performance - "At The Well" by H. Hageman.  Ruth is accompanied by Patricia Cullen

PAUL COSTAIN used his bass voice to great effect in the Songs from the Musicals class - he took first place with 90 marks for his singing of "If I Were A Rich Man" from Fiddler on the Roof.  His accompanist is Jill Collings

BUCHAN CHAMBER CHOIR under the baton of Sue Mills, accompanied by Gareth Moore, won the Mixed Choirs class for school years 3 to 6 with 87 marks.  Listen to them sing the traditional Shaker song "Simple Gifts" arranged by Andy Beck

RUSHEN SILVER BAND - from the Brass Band classes earlier in the week - a traditional Breton tune arranged by the Band's musical director - John Kinley - for the Interceltic Festival in L'Orient in 2015 which the Band attended.  It's called Plazon de Monde

CHRISTIAN COOPER and NIALL McCABE-O'KELLY - winners of the Duet class for years 7 - 13 - were awarded 89 marks for singing "Dear Theodosia" - a reflection on the responsibility of being a Father.  They are both members of Broadway Theatre Company 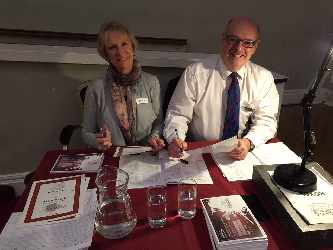