Looking back to Thursday 27 April 2017 at The Guild 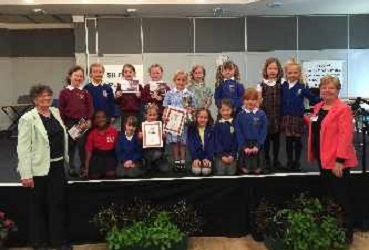 It was an emotional moment in the Promenade Suite on Thursday morning when some of the Guild's youngest entrants (school year 1) recited poems from Robert Louis Stevenson or Aileen Fisher.  The standard was high, but it was Talya Giuliani who was the first child to win the John Kennaugh Memorial Trophy, a new cup in memory of a great Manxman who was a passionate supporter of The Guild.  We were delighted that Mrs Margaret Kennaugh - John's widow - was in attendance to listen to the youngsters and present the trophy.  She's pictured here (left) with the whole class and the Adjudicator Audrey Behan

You can listen to Talya's class-winning poem - and lots of other winning performances - in Today at The Guild, first broadcast on Thursday 27 April and available now to listen On Demand

LON DHOO ENSEMBLE - conducted by Wendy McDowell and accompanied by Regina Kaniewski, took first place in the Vocal Ensemble class for Year 9 and over.   Listen to a very fine version of "The Song of the Jolly Roger"

KENNETH BAWDEN  won the Victorian/Edwardian ballad class with a truly beautiful song "Asthore"  - a song with Irish origins, subtitled "For My Own Love"  He was awarded 88 marks and his accompanist is Marilyn Cannell

MARILYN CANNELL won the Music Composition class with 87 marks for a song composed to celebrate the 125th anniversary of the Manx Music Festival - Marilyn not only wrote the words and music - but in the competition she sings and plays it too !

BUCHAN FALCONS - winners of the Boys Choir class up to Year 6 with 87 marks, singing  "One Candle" by Beck and Fisher.  Their musical director is Sue Mills, and Gareth Moore is the accompanist

VLADIMIR STEFANOV won the Instrumental Solo - Woodwind class - with 89 marks.  He played a medley of traditional tunes on the Highland Pipes

VICTORIA McLAUGHLAN sings again - this time her choice is "What Do You Do With Your Arms?" and for this she was awarded 88 marks and first place in the Comic Song class.  Her accompanist is Marilyn Cannell

ALEXANDRA SLATER won the Girls' Solo singing class for years 9 to 10) with 87 marks for her performance of the Manx traditional song "O What If The Fowler My Blackbird Has Taken"  Her accompanist is Frank Woolley.  This class win earned her a place in the competition for the Sheffield Plate - the award for the best young voice in the Guild this year

ANNABEL KING won the Sheffield Plate in 2016.  She qualified for the competition again this year by winning the Girls Solo singing class for years 7 - 8 with 88 marks.  Listen to her sing another Manx traditional song -  "Slumber Song" accompanied by Frank Woolley

JOSHUA BROWN accompanied by Frank Woolley played saxophone magnificently and won the Instrumental Solo class for Woodwind - years 7  to 10.  His performance of "Gypsy Songs" by Joseph Balog earned him 90 marks