The Sheffield Plate winner is announced! Full details in the penultimate report on another hectic day at the 2018 Guild

Another selection of class-winning performances, following the eighth  day of competitions in the Villa Marina.

The programme on Friday 27 April featured the following (please note that the list below is not necessarily the order in which the pieces are played in the programme):

EVAN DARROCH - Winner of the Boys Treble Solo class, singing accompanied by Frank Woolley. Evan went on to win the Sheffield Plate, singing with the 8 other winners of their individual solo voice classes.  Evan’s music teacher is Gareth Moore.

MATT CREER - Winner of the Songs from the Shows class, with a powerful and emotional version of “Gethsemane” from Jesus Christ Superstar - accompanied by Gareth Moore

BALLACOTTIER SCHOOL CHOIR directed by Katie Lawrence - Winners of the Mixed Choirs class and the Gaelic Choirs class.  All four of their winning songs are featured in this programme :

‘Can You Hear Me?’ by Bob Chilcott 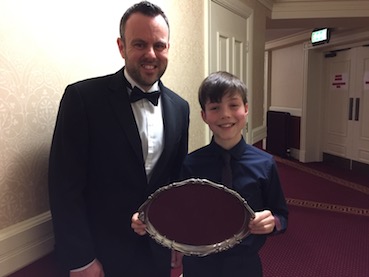