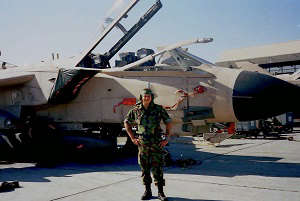 In June 1999, Island resident Charlie Brown was Administratively Discharged from the Royal Air Force after revealing that he was gay. Six months later, the MoD changed the rules, meaning that sexual orientation was no longer a bar to military service.

For Charlie, that decision came too late and he was one of the last ever military personnel to be discharged for being gay. Charlie relocated to the Island in 1999 and had a successful career in the aviation engineering industry. As well as colleagues, a career and a whole lifestyle, Charlie lost out on future promotions and the increased pension that would have brought.

These days, all three services have a very different attitude and are welcoming to the LGBTQ+ community and others.
Pictured : Charlie Brown on detachment with the Royal Air Force in front of one of the Tornado jets he was responsible for keeping flying