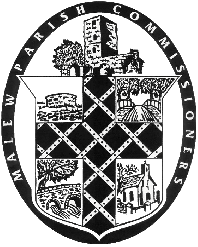 The Parish: Malew is named after the Celtic saint, Malew, also known as Saint Moluag, whose feast day is 25 June. It covers Ballasalla, Derbyhaven, Ronaldsway, and St Marks.

The Authority: Malew Parish Commissioners is responsible for a wide range of local services, including being part of the Southern Civic Amenity Site board and the Castletown & Malew Elderly Persons’ Housing Board.