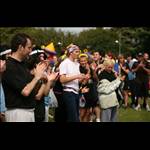 With just under a month to go before the Medis, It’s a Knockout Challenge 2008, which takes place on July 13th, organisers have called for teams to put themselves forward for the event.

‘The response so far has been fantastic’, said Emma Druggan of Medis, ‘currently, we have over 20 teams signed up, but there is still room for a few more to get on board before the deadline, which is Friday, June 20.

‘Any company, organisation, or group of individuals can enter a team, even a group of friends, or members of a club. It’s fantastic fun for the teams and for the spectators, plus it’s all in a good cause, raising money for charity.’

The Challenge, now in its third year, is one of the Island’s most successful fundraising events, and involves teams of between 6-10 people competing in a fundraising day based on the It’s a Knockout television series.

This year, the Isle of Man Children’s Centre and Isle of Man Breast Care will benefit from the day’s fund raising efforts.