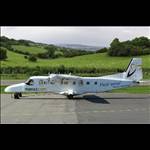 Manx2.com has just reached a major milestone, with the 100,000th customer having flown on one of its seven routes to and from the Isle of Man.

Manx2.com has also just seen its fleet boosted by the arrival of a new aircraft, namely a 19 seat Dornier 228 (pictured).

The company is working on a new maintenance base and general headquarters, which will be opened later this year at Isle of Man Airport.