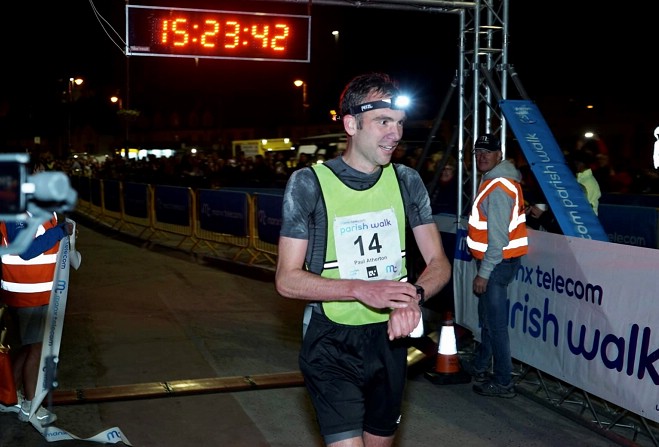 Just under 200 of the 1,600 Manx residents taking part in this year's Parish Walk completed the full 85-mile course.

192 walkers made it to the finish line on Douglas promenade ahead of the cutoff at 8am -106 men and 86 women.

Paul Atherton won the race, crossing the line just before 11.30pm yesterday to take his first Parish Walk victory. He spoke to Manx Radio's Paul Moran at the finish line:

2019 race winner Liam Parker was second, while Samantha Bowden won the women's race, finishing sixth overall with the ninth fastest time every by a woman. She spoke to Manx Radio midway through the race:

“This certainly wasn’t my plan. My plan was just to get round again” Struggling to catch up with the leading lady Samantha Bowden!

First-time finisher Simon Gawne was fifth, having led through the first half of the course.

Five-time winner Richard Gerrard was among the frontrunners when he stopped at Bride.

17-time finisher and former champion Robbie Callister pulled out at Peel, and announced this will be his last year competing for the win, although he intends to continue entering the event socially:

Further down the order, competitor number 137, Jim MacGregor crossed the finish line at 5.30am, having walked the whole course wearing a dog costume to raise funds for the Search and Rescue Dog Association, while it was a double celebration for first-time finisher Rachael Butterworth, who reached the finish line on her birthday.

Manxie Dog has done it!!! 85 miles in 21hrs 30 mins!! Absolutely incredible!! Thank you again for all your support. Jim is completely overwhelmed by the well wishes he’s recieved over every mile. Thank you too for all the donations that continue to flow in! 👏🏻 https://www.justgiving.com/fundraising/jim-macgregor7

Posted by Search and Rescue Dog Association (Isle of Man) on Saturday, June 19, 2021

Tom Quirk and Lottie Moore were the final two finishers, making it to the end of the race with less than three minutes to spare.

The finish line was relocated to the north end of Douglas promenade this year as a result of the ongoing promenade works, but race director Ray Cox hopes the finish will return to the War Memorial in 2022.