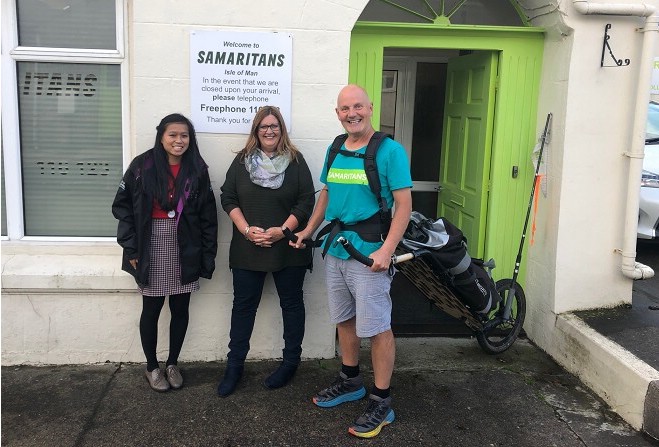 The Douglas branch of Samaritans had a very special visitor on Friday.

David Matthews, who has been a volunteer for the charity in the UK for more than a decade, has set himself the mammoth challenge of visiting each of the 201 branches across the British Isles... all on foot.

His 'listening walk' began in April and is set to last for two years, with around 6,000 miles to get through in total.

You can find out more about the challenge on its Facebook page.

He says he's a passionate believer in the organisation's work:

Mr Matthews hopes to raise £100,000 in sponsorship, and recruit 1,000 new volunteers for the charity.

Around a third of the way into his journey, he arrived on Manx shores for a whistle-stop tour of the Island.

With other fundraisers swimming, cycling, or jumping out of planes, he told Manx Radio there are some days where he does think twice about the challenge:

Mr Matthews is determined, though, and with around 1,900 miles under his belt already, he's showing no signs of stopping.

Dollin Mercer caught up with him during his brief stay in Douglas, and you can listen to their chat in full, here:

At the time of writing, Mr Matthews had raised more than £5,400 - you can visit his fundraising page here.