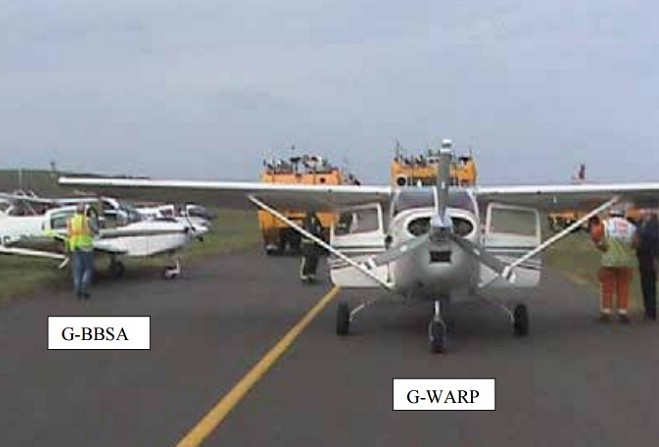 Plane lost around a foot off its wing

The UK’s Air Accident Investigation Branch has revealed how two light aircraft hit each other at Ronaldsway Airport on Senior Race Day.

In its latest bulletin into ongoing investigations, the AAIB says a Cessna 182F Skylane had been taxiing on a runway when its wing hit a rotating propeller on a stationary plane.

None of the five people in either aircraft were injured in the incident, which happened shortly before 4.30pm on June 12.

The AAIB document says 70 light aircraft were parked on either side of a taxiway and a pilot pulled forward until his nose wheel was on the taxiway as he awaited his turn to take off.

The pilot whose plane was taking off said he saw the stopped plane and thought he’d left plenty of room as he travelled along the taxiway.

However, he clipped his right wing as he passed – the other pilot said he’d shut down his engine but the propeller was still spinning at around 1,000 rpm.

He lost around a foot off the wing, while the other plane suffered slight damage.

The AAIB’s investigation into the incident continues.