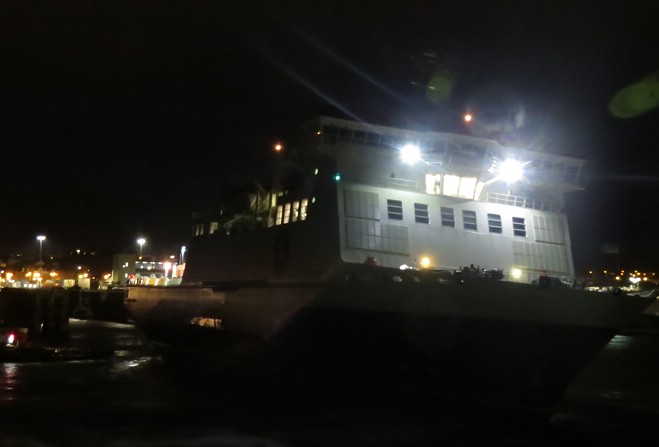 Steam Packet engineers are assessing damage to the Ben-my-Chree after the vessel struck King Edward Pier while attempting to berth in Douglas tonight (12 Feb).

The company says "strong gusting winds" hampered the ferry's turn in the harbour, causing it to "make contact" with the pier.

Passengers have described hearing a loud bang as the Ben crashed, and of damage to the stern. Those travelling on foot were unable to use the gang plank after damage to side railings, and had to disembark via the car deck.

A low spring tide is thought to have added to the vessel's problems as it manoeuvred, causing it to partially run aground, and for a time, list.

A tug was on standby to assist bringing the vessel alongside.

Tonight's 1945 crossing to Heysham has been cancelled, while the extent of damage to the Ben's hull is examined.

Back-up vessel MV Arrow, which was in Larne, Northern Ireland at the time of the incident, will return to Manx waters tomorrow to take on the Ben's freight duties.

Although the time frame for any repairs to Ben-my-Chree is not yet known, the Steam Packet is preparing to bring Manannan out of overhaul, to run passenger services.

These foot passengers described the impact: