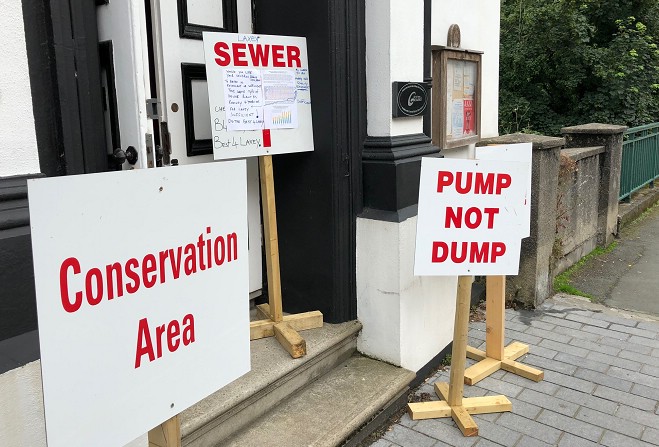 Works would 'ruin village for years to come'

Garff Commissioners has voted unanimously to object to plans for a new sewage treatment works in Laxey, arguing it would 'ruin' the village for years to come.

At the local authority's meeting last night (15 July), it was agreed a more suitable site should be found, to deal with the area's waste and stop discharge into the sea.

It comes as the multi-million pound proposal by Manx Utilities to build a plant at the Cairns in Laxey's harbour, will go to the planning committee next week.

After holding off on a response to the plans in April due to coronavirus, concerns were voiced for the first time in public by commissioners.

Along with taking issue with the potential of odorous fumes, traffic and the negative impact on nature, there was a consensus that a sewer in the heart of the village would spoil the special character of the harbour area.

Over 20 local residents were at the Working Men's Institute, some of whom were from the Best For Laxey, a campaign group calling for an alternative 'pump not dump' sewage scheme for the parish.

Also in attendance were both Garff MHKs Daphne Caine and Martyn Perkins, the latter of which has recently been made chair of the planning committee.

Quoting the Strategic Plan from 2016, commissioner Miranda Fargher argued the plans went against government's own policy and held no regard for Laxey as a 'unique heritage site.'

While Julie Pinson said that 'it didn't make sense to her' the treatment works would be built on a flood plain, adding 'nothing says it will be protected from high tide.'

But it's the 'weight of public opinion' as Andrew Moore put it, that been the driving force to oppose the plans, a sentiment later echoed by Peter Kinnish who said that 'virtually everyone in Laxey is against this.'

'We owe it to our children to stand against this' he said, after receiving 'an unprecedented number of letters and phone calls.'

More than 400 people from Laxey and Garwick signed a petition to stop the scheme following the unveiling of the plans by MU earlier this year.

This opposition though will have little bearing over whether it will be rejected, as the application will be considered purely on material planning concerns.

Nigel Dobson, who abstained from voting, told members 'there will be an appeal regardless of the planning committee's decision', to which it would ultimately be taken up by the Council of Ministers.

'Cynical it may seem' he said, 'the decision is inevitable.'

Once the vote carried, members of the public applauded with one cheering 'Well done the commissioners!'.