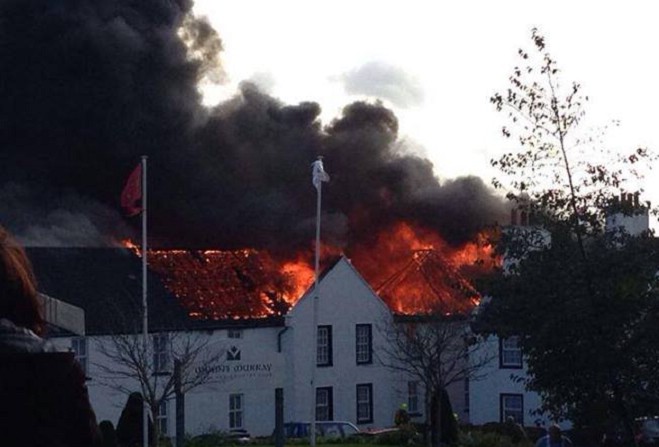 The 'tormented' boss of a roofing firm who caused the Mount Murray hotel fire in 2013 - a blaze which caused up to £17 million worth of damage - has avoided a jail term.

He was told he had 'come within a whisker of losing his liberty'.

The court heard how Cross 'regretted' that he survived the fire in November that year and had 'endured suffering' ever since.

Roofcraft boss Cross was convicted of breaching health and safety legislation in November - he stood trial after denying three breaches.

He was working on the roof of the hotel and leisure complex in Santon when the blaze broke out.

Half of the now closed complex was destroyed.

At his sentencing a short time ago, Deemster Dermot Main-Thompson told the roofer references showed he was a man of 'integrity' and 'good character', but someone whose actions were 'reckless' and a man still in denial.

Defence advocate Ian Kermode told Douglas courthouse that Cross had written personally to the deemster expressing his regret for what happened.

'The day will live with me forever,' he wrote.

The court heard the defendant was 'haunted' by the incident and had thought and dreamed about it every night since.

It was added that the actions of Cross - the only person to suffer minor injuries - led to a 'catastrophic' event, but he had not intentionally broken the law.

Mr Kermode said his client had been 'tormented' and was 'pleading for mercy after the only blemish in a 50-year working career'.

A social inquiry report added Cross was under pressure to get the work done.