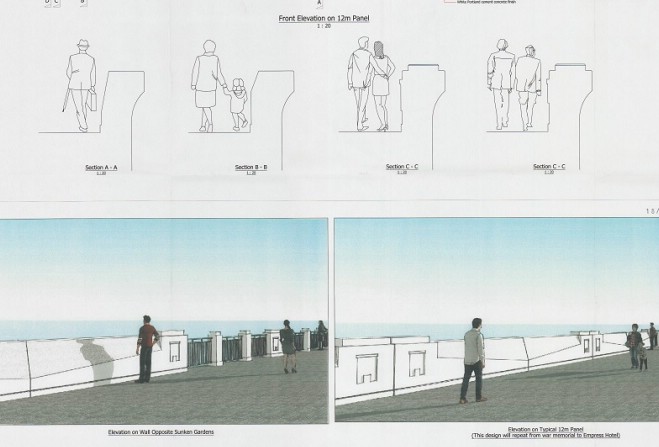 Concerns over 'a land of concrete'

'Plain, concrete, and nondescript', that's how Douglas Council has described government's plans for a 500 meter-long, 4ft high seawall along the promenade.

The local authority has objected to the Department of Infrastructure's designs, raising concerns about the impact on the view, lifebelts, flagpoles and access to the beach.

Starting from the end of the Marine Gardens, the proposed wall will continue along to finish opposite the Empress Hotel and is designed to protect against coastal over-topping

The body is chaired by Councillor Ritchie McNicholl:

'People like to see the sea, small children and those in wheelchairs won't have that view with what's being proposed'.

Mr McNicholl also says the wall 'will be there for a long time', and the committee want to see it embellished or made more attractive.

The body's view wasn't held by all of Douglas's local representatives though.

At a full meeting this week (14 November) Council Leader David Christian said the wall should be about protecting property, not ensuring a 'nice sea view'.

Councillor Chatel was opposed to the seafront becoming a 'land of concrete', whilst Councillor Bentley said a balance could be struck between making the wall look nice and providing the right defences.

Eleven councillors voted to approve the committee's minutes, with six, including Mr Christian voting against.