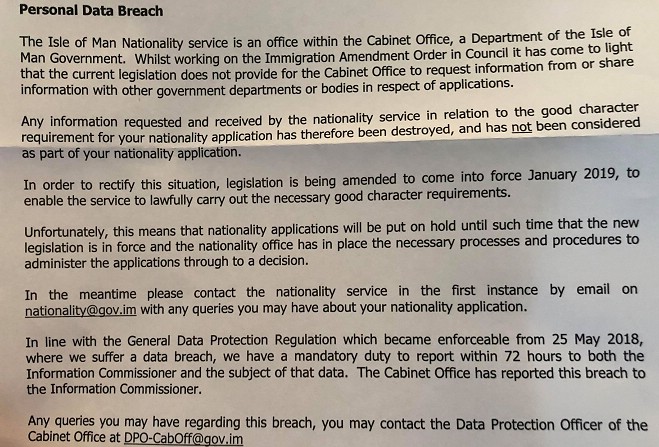 Many of those wishing to officially gain Manx nationality have had their applications delayed by several months, due to an internal government personal data breach.

Some residents, who applied for Manx nationality as early as Spring 2018, were issued a letter from the Cabinet Office informing them of the delay.

The letter said "current legislation does not provide for the Cabinet Office to request information from, or share information with, other government departments or bodies in respect of applications".

However, information had been shared between departments, to provide evidence for proof of good character - which is a requirement in order to be granted Manx nationality.

As a result, the letter says "any information requested and received by the nationality service has been destroyed, and has not been considered as part of your nationality application".

To solve the problem, the department says Manx legislation is being amended, to come into force in January of next year, in order for the service to lawfully carry out good character requirements.

The department has issued its apologies for any inconvenience caused.