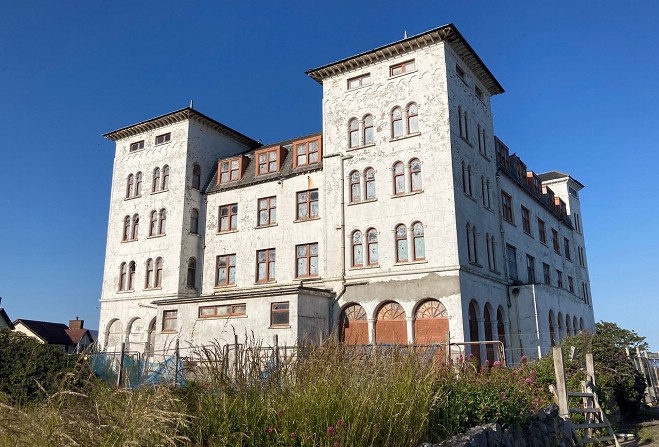 Date yet to be confirmed, but rebuild edges closer

An iconic building in Port St Mary, which has been 'empty and deteriorating' for over 30 years, could be demolished later this year.

The owners of the Bay Queen, a once-popular hotel during the boom years of tourism on the Island, are awaiting the go-ahead from planners.

Hartford Homes has applied for demolition consent this month to start its redevelopment of the site.

Until this is approved however, the property firm cannot put a date on when demolition will be begin.

The chair of Rushen Heritage Trust, an organisation which looks to preserve the cultural identity of the Island's 'beautiful south', says this 'is an important part of the process.'

'As far as I'm concerned, the sooner the demolition, the better.'

Hugh Davidson MBE says he has an 'emotional interest' in the site, because his father Alec was the original architect of the Bay Queen.

'A building of that size, a [multi-million pound] development on a landmark site, has an incredible number of regulations and micro approvals'.

The southern heritage charity says the 'twin towers' are being 'responsibly reproduced' by the developer which will be 'faithful copies'.

Hartford Homes purchased the building and the surrounding land in 2007 for £4 million.

Eleven years later, its plans to break up the former hotel into two blocks of 45 apartments were approved.

As part of the original planning application, demolition was included in 2018, but Mr Davidson says it will have been delayed due to 'government's preoccupation with Covid-19.'

'Many people in Port St Mary want this very, very important landmark site to be brought into play again. In the south we're fed up of empty sites and sites with buildings in a poor state.'

At the local authority's meeting this month, commissioner Bernadette Williams remarked 'at long last' when the demolition order was brought to the board's attention.