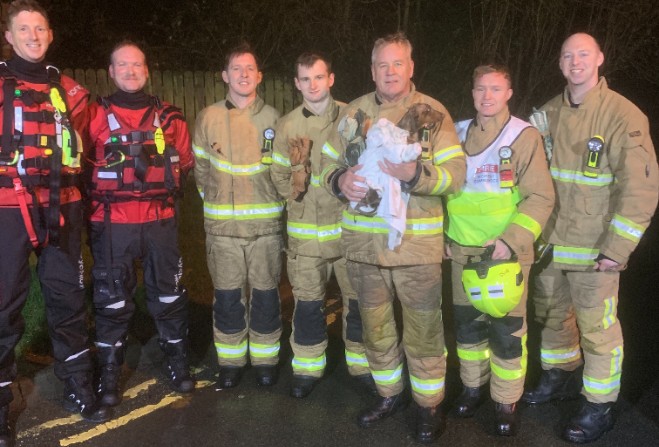 Penny had fallen in the River Glass on Lake Road

The owners of a dachshund were relieved and 'delighted' after fire crews rescued their puppy which fell in the River Glass on Lake Road in Douglas.

On Saturday, an emergency call was made to the Fire and Rescue Service reporting that Penny had fallen into the river near Tesco.

Unfortunately, due to the weather conditions there was no sign of her.

However, hours later, the crew received another call to say she had been spotted again.

Station officer, David Dallimore says they were met by a small crowd of people, who had still been searching, and with the help of port security, Penny was found on the riverbank.

Information From; Station Officer David Dallimore Date of Incident; 26th November 2022 Time of Call; 1949 Crews attending; 1 Fire Appliance, Duty Officer Incident details; Animal Rescue Yesterday, crews from Douglas were called to an animal rescue incident due to a puppy that had fallen into the River Glass. Crews were initially mobilised to this at 1330 after a call was made to the Emergency Services Joint Control Room (ESJCR) from a member of the public indicating that a sausage dog puppy had fallen into the river near to Tesco’s on the Lake Road side. The crew was in attendance for approx. 1 hour 30 mins looking for the puppy but could not find it. At this time there was no sign of the owner or the puppy in the area. We remained hopeful that the puppy had got out of the river of its own accord and left with its owner as neither could be found. Unfortunately this wasn’t the case and the owner later contacted the ESJCR to inform us that their puppy, a sausage dog called Penny, was missing and was last seen by the river on Lake Road. At this time we were fearing the worst as the puppy had been missing for a number of hours and had been seen falling into the river which was moving fast with strong currents. The weather was poor and the puppy’s chance of survival was extremely slim. At 1949 a member of the public contacted the ESJCR informing them that they believed they had seen a puppy in the River Glass near to Tesco’s. Crews mobilised to the area and were met by a small crowd of people who were looking for the puppy. With help from our colleagues from Port Security the puppy was located on the river bank. Firefighters accessed the bank using ladders and were able to rescue the puppy, which was very frightened but now safe. The owners of Penny, the sausage dog puppy, were delighted to be reunited with her.

Posted by Isle of Man Fire and Rescue Service on Sunday, November 27, 2022