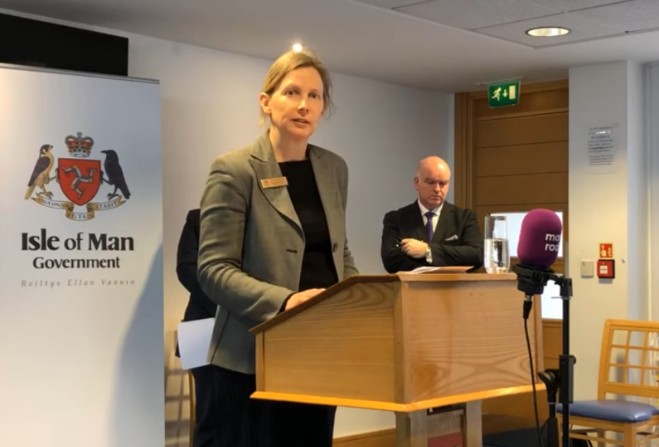 A 200-page report into an employment tribunal says the Island's former Medical Director was unfairly dismissed as a direct result of her whistleblowing.

The full judgment into Dr Rosalind Ranson's case against the Department of Health and Social Care has been published this morning.

Dr Ranson told a tribunal earlier this year that she received poor treatment and was ultimately dismissed from her post because she questioned decisions made in the early stages of the Island's response to the Covid-19 pandemic.

The report says the decision not to transfer Dr Ranson to Manx Care on 1 April last year amounted to a fundamental breach of her employment, and that she was therefore unfairly dismissed.

In the judgment, the tribunal criticises then-DHSC CEO Kathryn Magson for much of the tribulations and unhappiness Dr Ranson had to endure in her time working in the department.

The tribunal found it had no problem relying on the evidence from Dr Ranson, but said this was in sharp contrast to Miss Magson, disagreeing with the DHSC's legal team that she was a credible witness.

The late disclosure of documents by the health department also came under fire, particularly the submission of 'a significant and important email exchange' on 18 February - a week after submissions to the tribunal closed.

The judgment says this exchange cast doubt on the evidence of Miss Magson, and that it was unsatisfactory that non-disclosure had meant witnesses couldn't be asked about these emails during the tribunal.

The Attorney General's team, representing the department, explained that this wasn't disclosed earlier because the documents were in possession of Manx Care rather than DHSC, something the tribunal says raises concerns that other relevant files may have been missed.

There's also criticism of the Director of Public Health Dr Henrietta Ewart, with the tribunal describing her attitude towards Dr Ranson as 'hostile', 'unpleasant' and 'rude'.

Her evidence discussing Dr Ranson's decision to contact her about a testing pathway for a positive Covid case, which resulted in Dr Ewart blocking the Medical Director's phone number, was labelled by the tribunal as 'astonishing'.

The evidence from David Ashford, who was Health Minister during the majority of Dr Ranson's time with the department, was described as reflecting his best recollections, albeit not always consistent or easy to support by the panel, who added that Mr Ashford may have been mis-informed and over-reliant on Miss Magson for his information.

In the closing statements at the tribunal proceedings, Dr Ranson's lawyer alleged that the DHSC may have concocted documents submitted as evidence, claiming the metadata showed this to be the case.

The tribunal also raised concerns about the destruction of some documents, and has requested both parties liaise so evidence can be heard about the non-disclosure and destruction of documents at a future date.

Following the conclusion that Dr Ranson was unfairly dismissed, the report says the DHSC did not advance any fair reason to justify the dismissal. As a result, a further hearing will be needed to discuss appropriate remedies.

Dr Ranson's employment with the DHSC ceased on 26 January. The British Medical Association released a statement on the result of the tribunal.

Manx Radio has contacted the Isle of Man Government for a response.