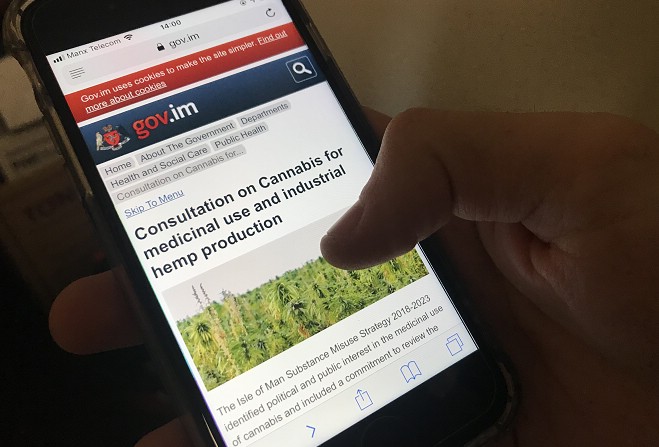 The Island could 'break away' from the current regulation of cannabis, if  it's what the people of the Isle of Man want.

At the launch of the online survey into the drug yesterday (6 Feb), Health Minister David Ashford says the issue of cannabis has been 'an ongoing debate' and that 'it is only right' government now consults with the public.

The consultation, which runs for six weeks, looks at the potential of cannabis as a medicine and as hemp, a cash crop grown for textiles and foodstuffs.

"What we want, is as many people as possible, to express their views to let us know what they think about the various options available for medicinal cannabis."

"Should we keep things as they are now? Should there be more wider prescribing by the GPs? Or should indeed, it be an over-the-counter without prescription?

"There is the possibility that government may decide that we want to break away from the regulation we have now and we want more general prescribing."

Following the UK's rescheduling of the drug in October last year, the Island's HM Attourney General revealed that decision does in fact apply to the Isle of Man.

Therefore at present, cannabis for medicinal purposes can only be prescribed in certain specialist circumstances by high-level consultants.

One of the options in the medicine element of the consultation, is that the Island remains in line with the UK in its regulation of the drug or moves to model more like the Netherlands or even to that of some states in America.

Mr Ashford, who has made no secret of his personal views on this issue, is wary of pre-empting the survey.

For those who fill out the consultation form he says, should consider the 'raft of information' available, courtesy of the Public Health Directorate, on the online hub.

"I have said pubicly I favour, long before I was Minister, that we should be prescribing at GP level.

"But the medical evidence is actually mixed, even in terms of individual conditions you can go out there and find medical papers that say 'in condition A, it has a huge effect'.

"Equally in another paper, 'there was no effect for condition A'.

"Different people have different experiences. So it's not a case of, 'there's a clear body of evidence out there' - it's a very mixed picture."

The Department's decision to consult the public on a potential medicine is unheard of as the Minister points out, all their medicines or pharmaceuticals have never been subject to such treatment.

"The reason being" he says "that this isn't just a medicinal decision, this is also a political decision.

"It is the public that has generated this over a long number of years and I think it would be very remiss of government to make a decision one way or the other, i.e. we're keeping the same regulatory regime or we're changing it, without going out to the public who generated the debate in the first place."

Hemp and the grower's licence

The second part of the government's cannabis consultation looks at the plant's ability to produce a range of materials and fibres potentially, for the textile and construction industry.

Although one might believe the responsibilty rests with Home Affairs or even the Department of Agriculture, the licensing of industrial hemp actually sits with the Department of Health and Social Care by virtue of the Misuse of Drugs Act 1976.

The legislation permits DHSC to produce a framework for growers should they see a need for it, but according to the department it has never received a request to do so.

However one person who takes issue with this, is the self-style cannabis consultant Jeff Ditchfield.

He claims in December 2018 he wrote to the Health Department's Chief Executive Malcolm Couch applying for such a licence.

"The Department say they have never received an application for a cannabis cultivation licence. That is incorrect."

Mr Ditchfield, author of the Medical Cannabis Guidebook, says he has a client on the Island willing to invest $2million dollars should he be granted a licence.

DHSC says prospective regulations on the production of hemp could open up economic opportunities for the Isle of Man.

You will be able to hear more from Minister Ashford and Jeff Ditchfield, on Manx Radio's "Sunday Opinion" program from midday on Sunday (10 Feb).

Listen here for the full Mandate report on the cannabis consultation: