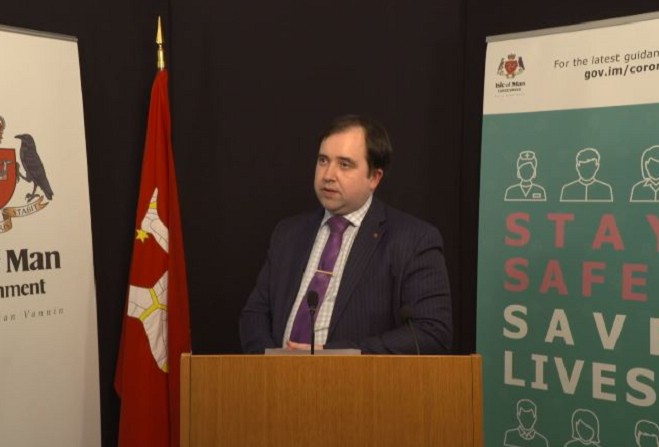 The Island's health minister is among seven Manx residents recognised in the Queen's birthday honours.

David Ashford receives an MBE for his work throughout the Covid-19 pandemic, including keeping the public updated at the daily coronavirus briefings.

He's one of three locals receiving the medal for their contributions during the outbreak, with this year's list including a dedicated Covid-19 honours section.

A statement from Government House says Mr Ashford showed remarkable courage and compassion in the face of the pandemic, showing kindness, humour and an unquestionable sense of duty at press conferences.

Consultant urologist at Noble's Hospital Peter Duffy is recognised for his surgical work. He also contacted patients on the Covid wards during his days off, and read to end of life patients in the absence of their relatives.

Ramsey Rugby Club's Gareth Hinge is included for arranging deliveries of food and medicine to those in the north of the Island.

Away from the pandemic, Ramsey lifeboat's Mark Kenyon is made an MBE for his work as a volunteer crew member of the last 30 years, as well as trainer of others in the RNLI.

Fundraiser Thelma Lomax receives the same honour for volunteering with Women's Aid and Refuge, amongst other charities. She's raised thousands for Manx charities over a three-decade period.

Christine Carter of the Laxey and Lonan Anti-Cancer Association receives a British Empire Medal for her fundraising work, including pop-up shops, charity dinners and choral concerts.

There's also a BEM for Harry Owens for outstanding services to beekeeping following his work to promote to good health of Manx bees. It comes a year after he spent three weeks teaching 200 beekeepers in Burundi how to care for their bees.

This year's honours list was delayed from June due to the coronavirus outbreak.