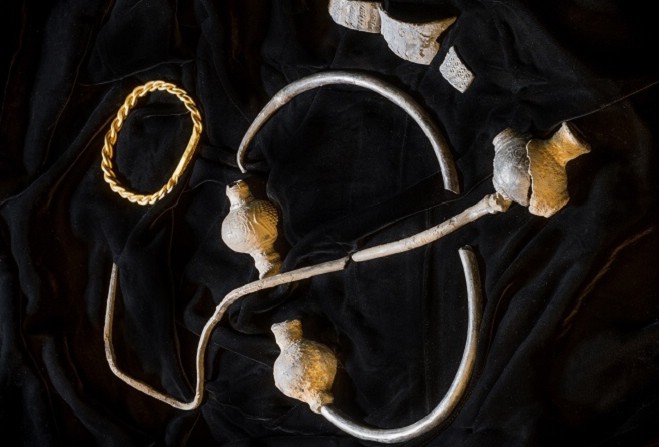 A hoard of Viking treasure from the 10th century has been discovered on the Isle of Man.

A gold-arm ring, silver brooch, an armband and other finds were found at the end of last year on private land by metal detectorist Kath Giles.

Manx National Heritage says the treasure is of international significance, and was likely buried around 950 AD.

Kath is thrilled to have found the artefacts, and says she knew when moving the soil away, she'd unearthed something significant.

The rest of the site has been examined, according to MNH's Curator for Archaeology Allison Fox, who says nothing else was found.

The exact location where the hoard was discovered isn't being revealed to protect the integrity of the site.

Mrs Fox says the gold arm-ring is an uncommon item for the Viking Age, with the owner likely a person of great wealth and status.

The items have gone on display today (18 Feb) in the Viking and Medieval Gallery at the Manx Museum, they'll then be sent away for valuation and further conservation work, before they return to the Island.

Similar discoveries on the Island were made at the Ballaquayle Hoard in Douglas in the 1890s.

The presence of the items suggest there may have been gold-working on the Island during the period, and that wealthy people lived here.

It's said the latest discovery reinforces these theories.

Today, a stunning collection of Viking Age artefacts discovered on the Isle of Man was declared Treasure! The...