'Information blockage' in DHSC during early stages of pandemic 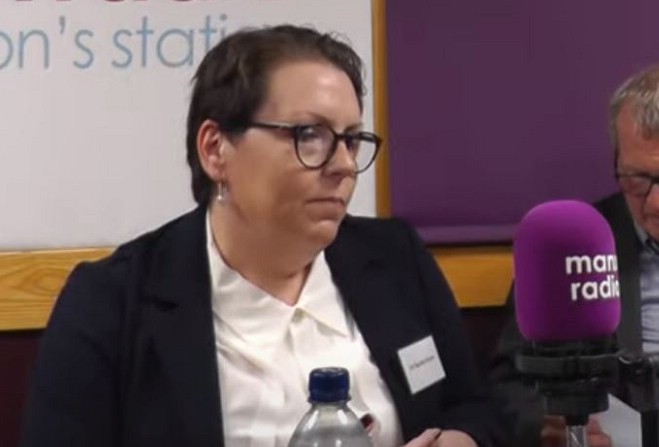 The scientist who set up on-Island Covid testing lab, in the early weeks of the pandemic, has claimed there was an 'information blockage' stopping her reports reaching the Council of Ministers.

Her statements supported previous claims by Dr Ranson herself that management at Noble's Hospital was witholding information from ministers.

Dr Glover said this was evidenced by figures stated at press briefings and in Tynwald - such as the Island's testing capacity - that varied from her own reports.

When asked if she'd waged a social media war and been vindictive towards the then-health minister, David Ashford, Dr Glover told the tribunal 'not at all'.

Focussing on her social media output Dr Glover was asked if she'd tweeted, after Mr Ashford was re-elected in September, that the constituents of Douglas North were 'a bunch of right-wing grannies'.

She said she 'didn't recall' tweeting such a remark and had made around 7-8,000 tweets - mostly retweeting other scientists.

She also claimed she'd had her account hacked recently and had been impersonated a number of times online in the past.

Dr Glover was hired by the Department of Health and Social Care in Spring 2020 and described a 'toxic culture' and 'backstabbing' in the top levels of hospital management.

She claimed the then-chief executive of DHSC Kathryn Magson would take 'gossip as fact' from people making negative comments about her and claimed she would 'freeze out people with alternative views'.

In her statement Dr Glover had described her frustration around the Island's testing strategy and capacity.

Elaborating on that statement whilst giving evidence she said certain ideas she'd suggest to management, such as setting up a testing facility on the Steam Packet ferries, were taken as 'science fiction' and not as viable options.

She claimed she felt the Director of Public Health, Dr Henrietta Ewart, was 'stuck in a by-gone age' and was not up-to-date with modern science.

The former DHSC CEO, Kathryn Magson, also appeared virtually at the tribunal today to give the last of her evidence.

She was questioned about whether or not she'd had any involvement in moving Dr Ranson out of her office 'without warning' into a new space with a broken chair.

When questioned yesterday Teresa Cope, the Manx Care chief executive, said that decision, if down to anyone, would have been Ms Magson's.

Oliver Segall QC, Dr Ranson's lawyer, put it to her that it was 'wildly unlikely' she wasn't involved - a statement Ms Magson said was 'not true'.

Ms Magson also claimed she had no involvement in removing Dr Ranson's personal assistant at a time when her workload had 'significantly increased'.

Ms Magson was asked if she was aware of a culture of bullying at the hospital - something she said she was concerned about when taking up her post in early 2020.

She admitted, however, she was unaware of bullying allegations towards the former chief operating officer, Angela Murray, who was dismissed by Mrs Cope in 2021.

Ms Magson claimed there was a 'huge transformation' to undertake.

The tribunal heard Dr Rosalind Ranson was placed under performance management during her first year in post and Ms Magson was asked to explain why she'd taken that measure.

Firstly she stated she 'couldn't have done more' for her and claimed Dr Ranson had been 'unable to change how she worked' and she had a concern for her 'impact on others'.

Ms Magson said for the first year Dr Ranson was under 'pre-informal' performance management contrary to claims from the Manx Care chief executive.

Yesterday Mrs Cope claimed she'd been told Dr Ranson was under Stage 1 performance management - something of concern when considering her for the role of Manx Care medical director.

Ms Magson said she'd always been clear about the position and said there wasn't any intention to mislead Mrs Cope and Manx Care chair Andrew Foster during the process to elect a new medical director.