Last chance for meat plant as new board steps in 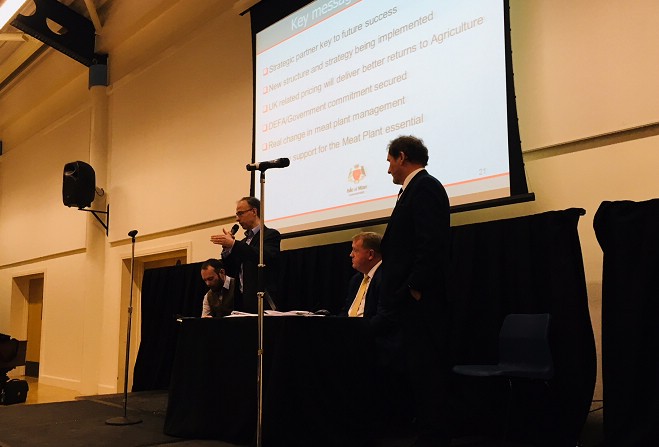 Government hopes the injection of £1 million and the creation of a new commercial management board will reverse the fortunes of the Island's loss-making meat plant.

At a meeting last night (11 Dec) in St Ninian's Lower School, stakeholders gathered to hear how a new body, called 'OpCo', would look to increase throughput at the plant, bring pricing structures in line with the UK, and better market Manx meat.

OpCo will replace the FMA in managing the facility - the new board will be chaired by Ayre and Michael MHK Tim Baker, with members from unions, the industry and DEFA.

It follows a failed tender exercise earlier in the year to find a suitable operator for the site, which annually requires substantial government funding.

The plans received criticism from some, but most of the more than 120 people in attendance gave them a cautious welcome:

The injection of £1 million worth of funding has been approved by Treasury and comes from within DEFA's existing budget.

Tim Baker MHK is set to be the chairman of the new body - he says if this doesn't work, nothing will: