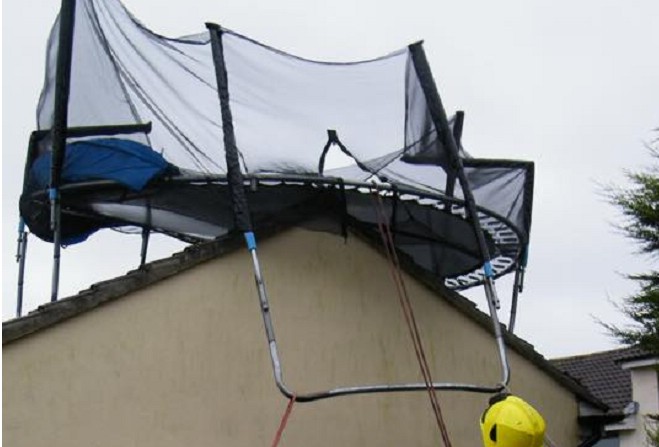 A trampoline which landed on a neighbouring roof was one of the unusual items of debris fire crews had to tackle.

Infrastructure road teams continue to be kept occupied around the Island tonight (Saturday).

Within the last half hour, a crew has been dispatched to the Barregarrow area to deal with reports of a tree down on the Ballaleigh Road.

The Jurby Road, on the Ramsey side of St. Jude’s Crossroads, is now open however.

A tree and power cables had been brought down earlier.

Baldrine Park, Whitebridge Hill, Begoade Road and the Creg-ny-Baa Back Road have also been re-opened within the last half an hour after infrastructure workers removed fallen trees which had partly blocked the roads.

The department’s Ellerslie Control depot has just closed after being manned since 7.30am on Friday.

Duty officers remain on call. The telephone number if you have a problem is 672000.

Widespread storm force gusts of up to 70 miles per hour were recorded around the Island during the afternoon.

The wind is now easing slightly but Adrian Cowin from the Met Office says there’s a late night surge to come.

To keep track of all updates regarding road closures and further disruption, stay tuned, visit our Manx Radio News Facebook page or go online at ManxRadio.com