'Majority' of Douglas promenade work to be completed by November 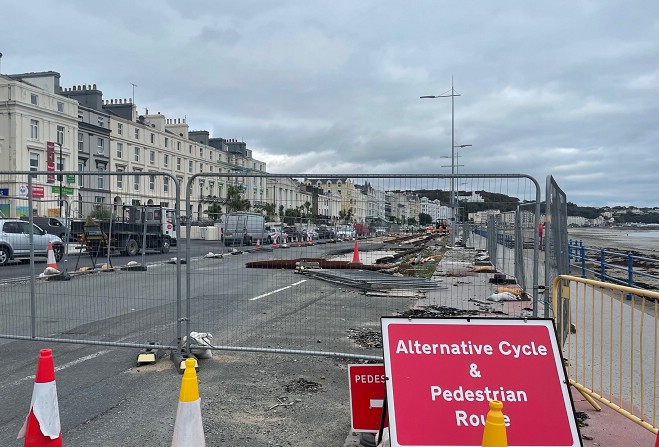 14 teams working on project - including three from DoI

The 'majority' of work on Douglas promenade will be completed by the start of next month.

That's the pledge from the Department of Infrastructure which has confirmed it's still working to the new date of 3 November.

It's after the September deadline was missed - something only revealed in minutes from a MyProm board meeting which were released last week.

However the DoI has now told Manx Radio that work will continue into November including a project to rectify defects.

It has also revealed up to four weeks is needed to complete tramway points - on a 70 metre section of tramway - between Broadway and Esplanade Mews.

This will reportedly be off the highway and have a 'minimal impact' on traffic flow - it will be getting underway 'soon'.

Fourteen teams are currently working on the prom with the majority from the contractor – Auldyn Construction – and its subcontractors.

However three DoI teams are being used to support, what government calls, 'the final push'.

It's also been confirmed that damage to the red concrete, near to the Palace Hotel, was caused when a tarmacking plant was being removed.

The issue, government says, has been raised with the contractor who is responsible for the defect.

Manx Radio asked the Department of Infrastructure to put forward a spokesperson for interview but the request was declined.

The station also approached Auldyn Construction for comment on the ongoing promenade works but was told due to a 'client requirement' all media questions had to be directed to the MyProm team within the department.