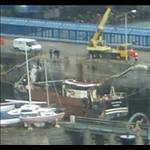 An oil spill on the King Edward Pier in Douglas this morning (Saturday) was dealt with by fire crews.

The fuel came from as tanker trailer on the pier.

The incident is next to the Solway Harvester (pictured) which has been moved across Douglas Harbour where it is ready for inspection by officers from the Sheriff's Court in Edinburgh where proceedings are underway to attempt to compel the owner of the Harvester, Richard Gidney, to give evidence into the inquests into the death of the seven crew members.

Choppy conditions delayed the disembarkation of the fast craft Viking's sailing to Liverpool.

Passengers were kept on board at The Pier Head in Liverpool for just over an hour.

The trip across this morning had attracted many on their way to Aintree for the Grand National.

The delay is likely to have a knock on effect for the rest of the day to the fast craft sailings.

Cloudy Lane is named after a road in the north of the island, near Mr Hemming's Ballavoddan home.