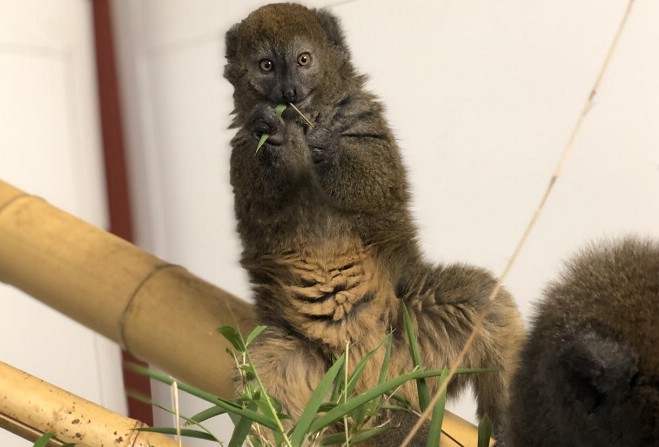 A lemur born to parents who survived a devastating fire in their enclosure at the Curraghs Wildlife Park has celebrated its first birthday.

The primates, from Madagascar, are on the International Union for the Conservation of Nature’s (IUCN) critically endangered list with as few as 2,500 left in the wild.

Since the fire the three lemurs, known as Bamboo lemurs because of their diet, have been cared for in an off show indoor area, but will soon move into their brand new ‘Lemurs of Madagascar’ enclosure in July.

To mark the occasion the park has donated £1,000 to conservation efforts by the Durrell Zoo in Jersey to help preserve the wetland habitat of Lake Alaotra in the highlands of Madagascar, where the species exclusively lives.

The park has made a number of changes to the new enclosure; the new house has been built from metal and different heaters used – which are surrounded by fire-resistant boards.

This has also been used since the fire to protect existing housing.

It is hoped that it won't be too long before Phoenix has a sibling, with the breeding program an important part of safe guarding the species along with conservation in the field.

The new enclosure sits on the former site of a bat enclosure so is quite wet and mirrors the wetland the species love so much.

It has been planted with bulrushes, Norfolk reeds and willow trees alongside wild flowers, Madagascan palm trees and the bamboo from which they get their name.

It is the only primate species in the world that lives exclusively in a wetland habitat and is at high risk of extinction due to rapid and ongoing habitat destruction for conversion of the marsh to rice-fields.