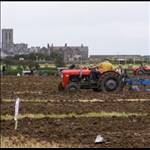 The Championships, the largest ploughing event the Island has ever hosted, took place at Great Meadow, Castletown at the weekend, with representatives from Austria, the United Kingdom, Belgium, Denmark, France, Germany and Ireland.

The overall winner of the competition was John Milnes from England, who also had the highest score in the Vintage Trailed class. Results: