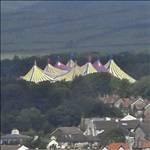 The Isle of Man is gearing up for its biggest musical event of the year.

Sir Elton John is due on stage in Noble's Park at 7.30 this evening (Thursday), in front of a sold out audience of around 8,000.

He's performing in a specially erected tent, one of the largest of its kind in Europe, and the advice to those with tickets is to turn up early to ensure they get to their places on time.

Manx Radio has been told the evening will operate to a strict timetable as Sir Elton is on a lengthy world tour. He will fly out of the Island immediately after the concert tonight, and Ronaldsway Airport will be staying open late to allow the superstar to get away.

It's the first time the knighted rocker has played in the Isle of Man and he is said to be very much looking forward to it. His current tour has seen him playing in some 'smaller' venues, which wouldn't normally put on such a massive star.

Organisers say ticket-holders who are on foot should make their way along Glencrutchery Road, where gates will be clearly signposted.

Police are advising drivers to set off early for the concert and be prepared for delays on routes around the area.

Inspector Richard Power says the main 'pinch points' will be St Ninian's crossroads and the entrance to Police Headquarters, where officers will be directing traffic.

He is asking people to be patient (first part of audio file):

Meanwhile, work has been going on for days to get the tent ready in time for this evening's massive gig, both for the audience and the famous performer.

Through the summer and autumn the tour will take in Turkey, Canada, Finland, Italy, the United States, Russia and Australia.