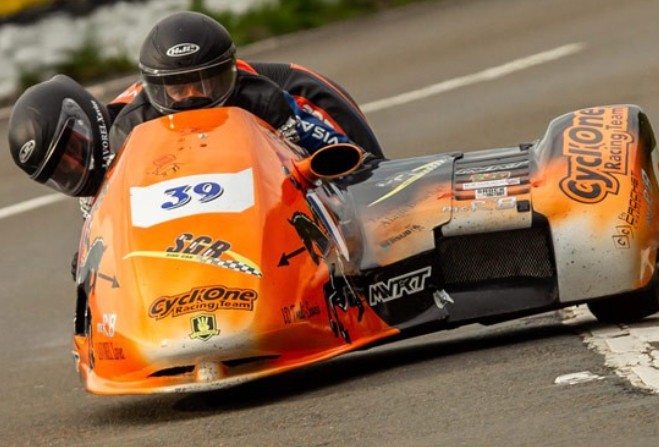 A French sidecar competitor who was killed in an incident at this year’s TT was carrying his teammate’s identification on him when their sidecar crashed.

The inquest into his death was opened and adjourned at Douglas Courthouse today (17 June) with Coroner of Inquests Jayne Hughes describing how identifying Mr Chanal had been ‘by no means straightforward’.

It follows a case of mistaken identification after race organisers wrongly reported that it had been Mr Chanal’s sidecar passenger Olivier Lavorel who had died at the scene.

The court heard both men had been taken to Noble’s Hospital after the red flag incident – one to the mortuary and the other to the emergency department.

A statement from the mortuary worker who helped identify the deceased said he was faced with someone who’d suffered ‘catastrophic trauma’.

After searching his leathers he found a single metal dog tag, in a pocket, which displayed the name ‘Olivier Lavorel’ and the inscription ‘French’ – there were no other identifiable references.

A statement from a consultant working in the emergency department said medical staff there too had struggled to identify the racer they were treating due to the trauma they’d suffered.

He too was not wearing anything identifiable but they did find a dog tag concealed in his leathers which said ‘César Chanal’.

The man who was in a critical condition, and who it later transpired was Mr Lavorel, was flown to a UK hospital for treatment.

Three days later concerns were raised by the Clerk of the Course about the possibility of mistaken identity after a helmet was retrieved from the scene and video footage of the crash was reviewed.

The court also heard how César Chanal’s mother had gone to Walton Hospital to be with her son only to find the patient in their care was Mr Lavorel.

Mr Lavorel’s relative had also flown to the Island and told race authorities they may be able to identify the men by their hair as Mr Lavorel had short hair whilst Mr Chanal had long.

Calls were made to Walton Hospital where medical staff there confirmed the blood group of their patient and that he had short hair.

The court heard dog tags are used for identification purposes and should be worn around the neck and riders are required, by race regulations, to demonstrate this in the scruitneering process.

A statement from the French team’s mechanic said the sidecar duo had not had chains for their ID tags and so had put them into the pockets of their leathers adding he’d never heard them discussing swapping them.

Mrs Hughes said identifying the two men had been ‘extremely difficult’ and the initial identification, although done in ‘good faith’, was wrong.

She added that there was ‘insufficient evidence’, at this stage, to determine why the riders were not in possession of their own ID tags and urged people not to speculate on social media about the incident.

Releasing Mr Chanal’s body to his family so that funeral arrangements could take place she confirmed a full inquest into his death will take place at a later date.