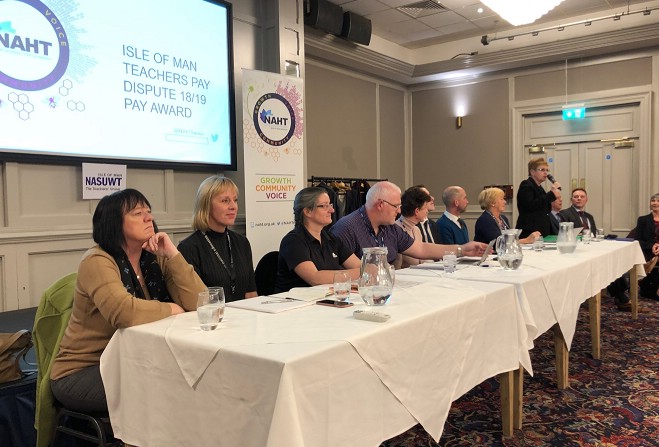 Representatives from the teaching unions at a meeting attended by more than 800 teachers last month.

It's over their ongoing pay dispute with the Department of Education, Sport and Culture.

The NAHT, NASUWT and ASCL will send ballot papers to members next month, with industrial action lined up for the start of February if there's support.

Rob Kelsall from the NAHT says there's been little progress during talks with the department:

The announcement comes after NAHT members took industrial action short of a strike earlier this term, with headteachers taking steps that wouldn't affect teaching within the classroom.

This included not attending meetings with the Department, picketing a meeting outside the Comis Hotel, and refusing to engage in surveys or inset training days. 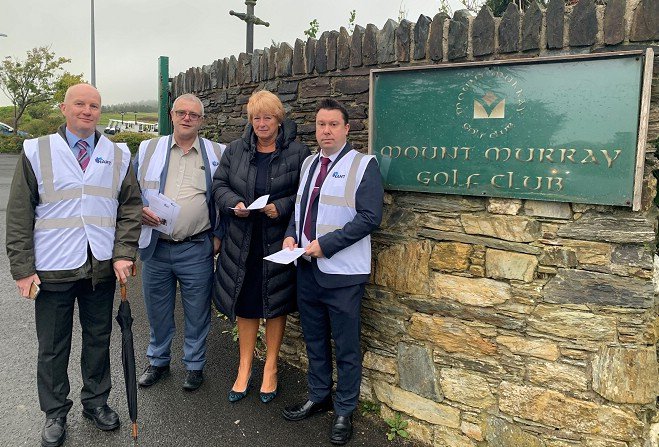 Headteachers picketing a Department of Education, Sport and Culture meeting earlier this year.

You can hear Mr Kelsall's full interview with Sian Cowper below:

This decision follows a meeting attended by more than 800 teachers at a meeting at the Comis Hotel last month, where an indicative vote showed those in the profession would support industrial action.

Sending my solidarity to @NAHTnews members in the #IsleOfMan Over 4OO teachers and leaders gathering to determine its next steps over pay dispute @ManxRadio @maximjkelly @marcuusworld pic.twitter.com/RQ8o981T49

Pay awards for Manx teachers are currently set by the UK Secretary of State for Education, resulting in claims by unions that teachers on the Island are now paid 20% less than their UK counterparts due to the higher cost of living, and 30% down on 10 years ago.

In October, it was announced a 2.75% rise across all pay scales had been agreed, along with a 10-point action plan on future pay and conditions, but talks between the unions and the DESC set for the start of December were postponed.

Damien McNulty of the NASUWT union wants to see a three-year plan in place:

Listen to Mr McNulty's full interview with Sian Cowper below:

In a statement, Isle of Man Government said:

"The Isle of Man government recognises the commitment and dedication of all teachers to provide a first class education for the children of the Isle of Man.

"Teachers’ pay in the Isle of Man is linked to the pay award settlement for teachers set out by the UK Secretary of State for Education.

"The government has been negotiating with unions representing teacher groups regarding the pay settlement for 2018/2019 and is committed to an ongoing dialogue with all the unions."

Political member for the Department Lawrie Hooper has previously voiced support for a review of the way pay awards are calculated for teachers in Manx schools, while a recent statement from DESC on this issue said: "The Isle of Man Government values and respects the professionalism, dedication and commitment of all the teachers on the Island."