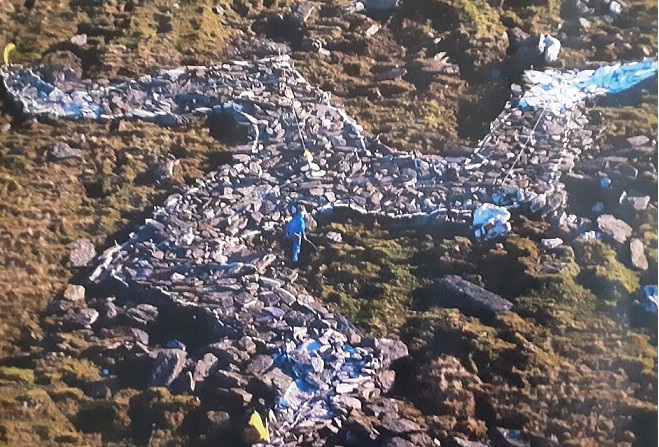 Planners to look at potential breach on summit

A three legs of man built from hundreds of stones on North Barrule, could be in breach of planning laws after its feet were painted white.

It comes after a formal complaint from one resident in Ramsey who has branded the 100ft hillside triskelion 'an eyesore'.

Planning enforcers who notified Ramsey commissioners, have now launched an investigation after it found alterations were made without prior approval.

Bryan Callister, the man who constructed the symbol on the Island's second highest summit, had planned to paint it white following its completion, so it could be more visible.

Last year, the 71-year-old brought hundreds of rocks up the hill after seeking permission from the landowner to build what he believed would become a tourist landmark.

After 12 weeks of building the stone feature, Mr Callister submitted plans for approval to paint it.

Whilst awaiting the decision, he painted the feet of the three legs white.

He has since withdrawn his application.

In a letter to the planning authority he said '[I] simply tried to do something good for the Isle of Man, but they don't want it, so maybe I'm wrong'.