Another sixth for Pitt 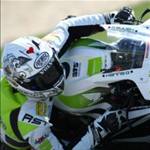 Peel resident Andrew Pitt grabbed his second consecutive sixth place in the penultimate round of the World Supersport Championship yesterday.

Crutchlow's title rival Eugene Laverty crashed out about half way through the race while contesting the lead with Lascorz.

Crutchlow now leads the standings by 19 points from Laverty, leaving the Irishman needing a miracle in the final round if he's to lift the title in his first season at this level.