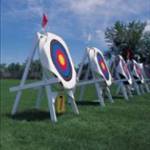 Breaking with tradition, the Isle of Man Archery Club held its annual Windsor Round on Sunday instead of in September.

The weather was reminiscent of the first day shooting in the Shetland Island Games, with extremely windy conditions for the archers to cope with.

Although the wind does affect the arrow flight to a degree, it has more of an effect on the archer, who's buffeted about when at full draw, and on release this can result in some
wayward arrows.

It therefore came as no surprise the scores were lower than the records already set for this round.

However the exceptions, once again, were in the Junior ranks.

Charlotte George again showed that her improved form is holding out, she put in a personal best score and in doing so improved the Club Under 16 Recurve record.

Younger sister Aalin set a new Junior compound record and personal record for the round as this was the first time it had been shot, and youngest sister Kirsten also set a new Club Under 13 Junior Recurve record for the Junior Windsor, beating Charlotte's old one.

This was also Kirsten's first attempt at this round, so she set a new personal record as well.

There was a close contest between the gents in both the compound and the recurve divisions, with compound archer Allan George pipping Adrian Bruce to first place by six points, after Adrian put in two fives in the final dozen.

Dave Berry was in the lead in the gents recurve, only to discover that both Charlotte George and Anne Rutland had beaten him on score.