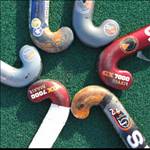 Bacchas came out as victors in mixed hockey’s top clash at the NSC on Saturday afternoon – both teams maintaining their strong defensive records, before Sharon Pope scored the only goal of the match to put Bacchas in pole position for the Wi-Manx Mixed Premier title this season.

Both teams had significant changes on goals, and keepers Greg Turner and Will Margot were both required to make high quality saves.

The performance draws Bacchas even with Valkyrs on points at the top of the Premier League, but Bacchas have a game in hand against Vikings next weekend, which they will expect to win.

The two teams are significantly ahead of the remaining teams in the league, and a narrow victory for Bacchas lines up a tantalising season finale in a few weeks' time when the two teams meet again.

If both teams win intervening fixtures, Valkyrs will still have an opportunity to claim the league with victory by two goals in that fixture.

Meanwhile, elsewhere in the Premier League, an unusual 0-0 draw between Castletown Celts and Ramsey earns each team an extra point, making Celts' position in the top four more secure, and earning Ramsey a crucial extra point above Vikings B at the bottom of the league.

Despite the scoreline, there were plenty of chances in front of goal during the match.

Elsewhere, Kim Carney returned to Vikings for the weekend to captain the Vikings Ladies team at the beginning of a run in the England Hockey Ladies Trophy.

Following runs in the EH Vase in previous years which saw the ladies reach the semi-final for two consecutive years, Vikings have switched their attentions to the more difficult Trophy for the second time this season.

The ladies scooped a spectacular 3-1 victory against Deeside Ramblers, from England’s Division One North on Sunday – more details on the match to follow later in the week, with a detailed review on Friday Sport at 6pm.

The next round for the Trophy has already been drawn, with the ladies facing another away trip to Crewe Vagrants on November 25.

Whilst the Trophy’s second round is already further than an island-based ladies team have progressed in recent memory, Crewe are a division lower than Deeside, so Vikings could be hopeful of progressing yet further.

Elsewhere in domestic hockey, Harlequins A drew the short straw on Saturday by missing out on the top half of the league split in Wi-Manx Division One following a 3-1 loss to Saracens Sabres.

Going into Saturday, five teams were within one point in this highly competitive league.

Ramsey Ravens further solidified their position at the top of Wi-Manx Division Two with a comprehensive 7-0 victory over Castletown Cosney.