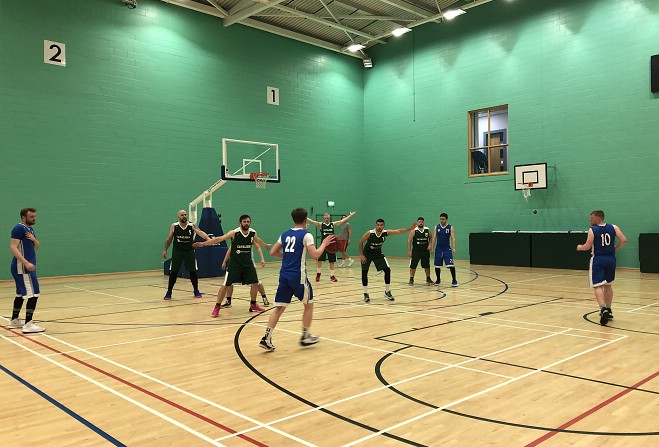 Tensions were high and emotions swirling last night (Thurs 4) in the latest round of the Men's Basketball League.

The NSC played host to two magnificently competitive games, both of which went down to the wire.

On court 1, Wolves and Cavaliers had spectators on the edge of their seats from start to finish.

Wolves started strong, taking and maintaining the lead in the first quarter but Cavs came back fighting in the second, racking up a steady string of shots which took them ahead, leaving Wolves with a mental uphill battle.

By half time, heads were down in the Wolves corner, which Cav's prayed upon extending their lead, sinking shots with ease and quiet confidence.

Something clicked into place for the underdog side in the fourth quarter, with each player fired up and ready to fight to close the gap.

Despite a few wobbles in attack, the cause of Wolves man-to-man pressure, Cavs carried on, calm and collected.

In the end, Wolves ran out of time.

In what was an incredibly exciting final quarter, Cavs took the win.

It was a game of Michael's with player of the match on Wolves side going to Michael Pardoe and Michael Lewis from Cavs.

There was controversy in the other match of the night between rivals Douglas and Turkeys.

The game was practically goal-to-goal from start to finish, and what a finish it was.

Douglas got points on the board in the dying seconds, leaving them on 60; three points ahead of Turkeys when the final buzzer sounded.

Turkeys turned to the bench officials, claiming foul play; they believed Douglas, while attacking, were in their own half for 14 seconds - the rule being you can only be in it for 8.

This would put six seconds back on the clock for the Turkeys, just enough time to potentially sink a three-pointer, levelling the game.

However, officials ruled against the request, leaving Douglas on a high with a well-fought win.

Earlier in the evening, it was the final round of the year for the Ladies League, which saw the Bulldogs, Terriers, and Poodles meet once again on court for a round robin comp.

Each side was made up of a mix of seasoned pros and brand new players; a promising sign for the league and its competitors, who have seen a boost in numbers this year after strongly encouraging more women to get involved in the sport.

After two hours of matches, the result was a mirror image of the previous meeting.

Bulldogs came out as unshaken tournament champions, keeping terriers at bay, who spent the night snapping at their heels every step of the way.

Poodles came in third but celebrated small victories as new players honed in on a plethora of skills, which was appreciated (via loud cheering) from all the women competing.