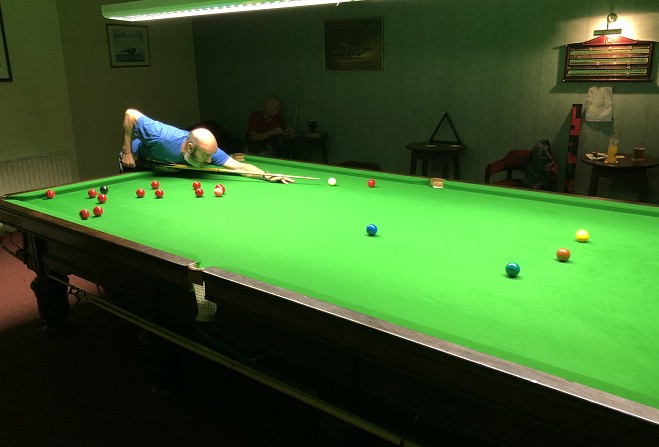 There were several sizeable breaks in week five of the 2018/19 Macs Builders Merchants snooker league, as Peel pulled clear of the chasing pack.

Peter Kirkham had set the early high break of the season as he scored a stylish 56 on 10 October, only to see his record broken by a point a fortnight later when James Kerr reached 57.

However, Kirkham regained that lead on home soil this week, as he amassed 68 points in a single visit this time round, en route to his frame victory over Simon Gardner.

His Finch Hill ‘Mob’ teammates weren't far behind either – Tom Miller had a break of 41 and Steve Finnegan 20 as they too took wins against the Douglas Snooker Club ‘Newbys’ to make it 3-0.

‘Newbys’ fought back, though, with wins for Ste MacDonald and Zain Abideen securing valuable points for the visitors.

Making a triumphant return to league snooker was last season’s player of the year John Kennish – the multiple-time Island champion looked like he'd never been away, with breaks of 35 and 31 in his frame win over Matt Radley.

Perhaps nowadays known predominantly as a coach, Delaney played well for the second time in two weeks to win, in spite of a break of 25 for opponent Matthew Dodd.

There was another good break scored in Ramsey – Sean Corkish pieced together 28 to take him to five wins from five.

That makes him one of just two players to maintain a perfect record.

Benito Mongiovi and James Kerr also won to put the northerners 3-0 up at home to Port St Mary Legion, but Marc Morley and Terry Boyle steadied the ship to take two points home over the length-of-the-Island trip south.

There was yet more slick scoring at Douglas Snooker Club as Chris Dagnall recorded visits of 22 and 20 to beat Roy Gelling of Malew 1 – Chris Murphy won the only other frame for them though, as Eric Drinkwater, Nick Crouchman and John Faragher sealed a good away win.

Meanwhile back in Ballasalla, dark horses Malew 2 climb to third in the table after winning 4-1 at home to Douglas Snooker Club ‘Wannabes’.

Paul Bridson, Tony Pring, David Quayle and Alec Oates were the winners for the home side, with Fred Corris securing a consolation for the guests.

However, last but most certainly not least, Peel Legion extended their lead at the top of the table this week after a 4-1 win of their own at home to Finch Hill ‘Young Guns’.

It could have been a different story – Brendan Clague won his first ever competitive frame to end Kyle Darby’s unbeaten run this season and put the ‘Young Guns’ 1-0 up.

But Don Humphries dug deep for a scrappy win over Darryl Hill, Mike Crook made light work of debutant Rhys Moore, Geoff Hall cleared blue, pink and black to defeat Will Duquemin by four points and John Kelly annihilated Dollin Mercer by 81 points to 16 to show why the westerners are the deserved clear league leaders, a quarter of the way through the season.

Along with St Olaves’ Sean Corkish, John Kelly is the only other player who now remains on five wins from five matches – both will doubtless see their handicaps drop when the committee holds its review after next week’s results.