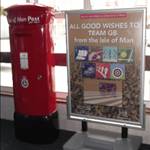 The Island’s gearing up to see whether Mark Cavendish can win Olympic gold this weekend – and there’ll be plenty of ways to watch the race.

In Peel, the Creek Inn says it’ll put large TVs outside if the weather is fine, while in Douglas Colours says it plans to show the men’s road race on the big screen.

But there’ll be no public big screens despite a suggestion from Geoff Corkish MHK that the Villa Marina could play host to them.

Belinda Cooil, president of the Southern Agricultural Show, says the 50-inch screens organisers will put up at Great Meadow in Castletown will likely be a literal show-stopper: