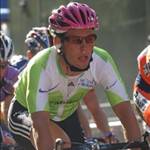 He is the first Great Britain rider to take the yellow since the tour resumed in 2004.

Today's first stage from Reading to Southampton should conclude with a bunch sprint finish, with 71 miles of predominantly flat roads.