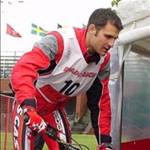 The final round of the 2010 Solo Trials Centre Championship, hosted by the Peveril Motorcycle Club, took place on Sunday in dry, bright but cold conditions, which was indeed a welcome change from all the rain we have had of late.

The single-lap trial started and finished at the club's headquarters at Knock Froy, with
the route taken following a figure-of-eight pattern.

It used many of the usual Manx Two Day Trial venues including South Barrule quarry and gulley, Glen Rushen, Pipeline, Arrasey and Stoney Mountain, with less well used venues such as Mullinaragher, Ballachrink and Ballanicholas thrown in for good measure.

There were 30 sections in total, located in 12 groups with each section only ridden once.

The trial had a good mix of terrain with muddy climbs, step drops, rock steps and streams.

The wet and slippery conditions caught out many of the riders with ex-world championship contender Steve Colley dropping an early five on the fourth section of the day at Mullinaragher, on top of the one he had already lost at the second in Knock Froy.

After these early mistakes he soon got back into his stride and only dropped one more mark on the very difficult first section at Arrasey Plantation.

Other notable rides included Aleyn Taggart, who finished second in the clubman class, and relative newcomer Jack Faragher, who was fourth in the expert class and was the only rider to get up the section in Mullinaragher fived by Colley.

As expected, Steve Colley dominated the expert class with a loss of seven marks, but the lower order was a hard-fought battle with only a few marks separating second to seventh places.

The clubman class was again won by Neil Christian, who made it six wins out of six starts in the championship, with a loss of 19 marks.

Second-placed man Taggart finished on nearly double that at 36 marks lost, however second to ninth was extremely close, with a count back of cleans and most ones needed to decide the finishing order.

In the sportsman/twin shock class only one mark separated first and second place with the win going to Russell Millward on 21 from David Harding on 22.

It was a very costly five for Harding on the last section of the day at Knock Froy, for not only did it mean he lost out on the win; he also lost out on the class championship as well because a win on the day would have been enough to secure it.

New committee members Nigel Crellin and Robbie Skillicorn, along with Kevin Whiteway and Richard Freeman, did an excellent job of setting out the sections and many thanks to them for all their hard work.